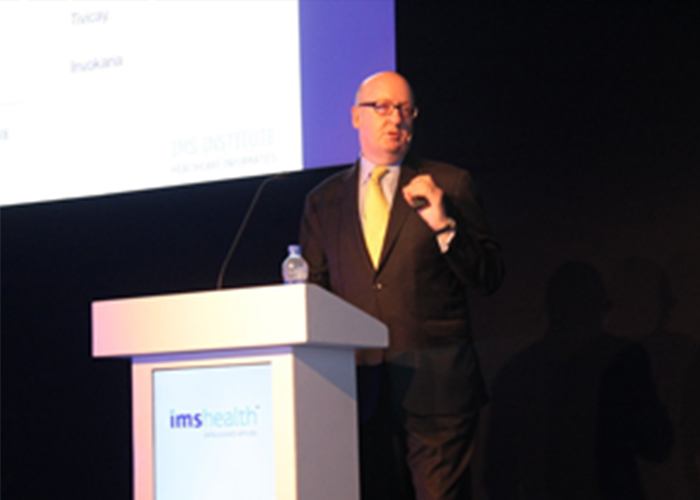 New Zealander Murray Aitken, Executive Director of IMS Institute for Healthcare Informatics, arrived in Argentina to give his global perspectives.

New Zealander Murray Aitken –Executive Director of IMS Institute for Healthcare Informatics- arrived in Argentina to give his global perspectives.

Aitken explained which therapeutic areas were the most important and grew at the fastest rates during 2014.

Hepatitis C is undoubtedly the star of innovation. The brands that stand out in this area are Sovaldi and Harvoni, manufactured by Gilead; and Olysio, owned by Janssen.

Hepatitis C is undoubtedly the star of innovation while Cancer drugs occupy the second place among the main therapeutic areas.

Multiple sclerosis is in the third place. And the stand-out brand to treat this disease is Tecfidera, made by Biogen. The next leading therapeutic area is HIV, where the brand Tivicay, manufactured by ViiV –owned by GSK and Pfizer- plays a major role. Diabetes occupies the fifth place, and the innovative brand Invokana, made by Janssen, stands out here.

This year Murray talked again about the “Pharmerging countries”, the term coined by IMS Health that is still in the limelight.

He explained that those markets put the focus on volume and are giving more and more importance to low cost generics.

Then Murray moved on to the pharma global ranking and he talked about the top ten companies. He said that Pfizer had lost first place to Swiss firm Novartis, which had climbed to the top of the global ranking.

The expert explained that the Swiss company climbed to the first place of the global ranking. Looking in depth into the top ten, another noteworthy change was Roche, which jumped from seventh to fourth place. Lilly and GSK are also in the spotlight. Lilly left the top ten, and GSK dropped from the sixth to the eighth position.  The great winner is Gilead, which entered the select group in 2014, after being in the 25th place for some years.

Biological drugs also had their place in the 2015 IMS World Review.

The IMS expert defined this era as the Golden Age for biological drugs. He also said that the life cycle of these drugs is being constantly pushed by innovative competence, and biosimilars, which are at higher rates.

And since biological drugs are the key, Murray asked himself in front of the audience if Latin American systems were prepared to face this innovative wave.

Murray said that there are mainly four drivers of innovation: legislative changes, such as orphan drugs laws; regulatory simplification; the birth of new participants, such as Celera; and the efforts made by patients, like PatientslikeMe initiative.

Lastly, the expert talked about the future global perspectives for the pharmaceutical industry.