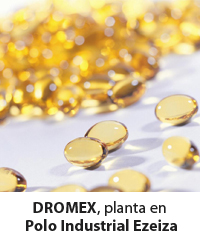 Julio Scardigli’s Dromex Group has cut the ribbon on a new soft capsule plant at the recently-opened Ezeiza industrial estate in the province of Buenos Aires.

Julio Scardigli’s Dromex Group has cut the ribbon on a new soft capsule plant at the recently-opened Ezeiza industrial estate in the province of Buenos Aires.

Representing an investment of $US 5 million in cash and bank loans, the plant is the second soft capsule manufacturing site in Argentina and the first for a local company. Until now Catalent, owned by US-based investment fund The Blackstone Group, had been the only softgel producer in the country, with its established plant in Loma Hermosa in Greater Buenos Aires.

Dromex’s new venture received the green light from INAME (the Argentine National Institute of Drugs) this November and is all set to receive its first orders from pharmaceutical laboratories, which are increasingly turning to  soft capsules to deliver their products.

The growing interest in the softgel format can be seen in Catalent’s recent acquisition of Brazilian soft capsule manufacturer Relthy. See press release.

Dromex has called in the experts for its new project, bringing Argentine national Fernando Turczak back from Colombia, where he formed part of Procaps, the other Latin group focused on soft capsule production.

It is the first company to begin operations in the new Ezeiza industrial estate, a private initiative which Pharmabiz visited in the second week of November.

Its Brazilian subsidiary is run by Oswaldo Ramírez, while its Barcelona operation is led by Federico Ontiveros and its Mexico business by Alec Delaney.