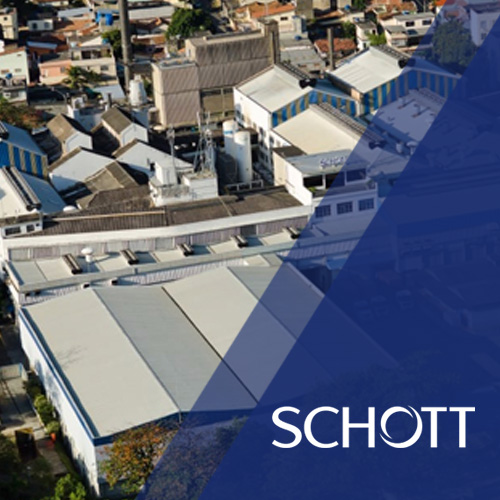 Germany’s Schott, a specialist glass maker that produces glass for the pharmaceutical industry Pharmabiz to tour its manufacturing plant in Rio de Janeiro. The company told Pharmabiz that it would maintain its investments in the region where it operates three production sites, one in Rio where it makes raw materials; one that makes finished products in Sao Paulo; and a site in Argentina.

Germany’s Schott group plans to invest US $13m in the region over the next two years. The investment is for the production of pharmaceutical tubing produced at its site in Rio de Janeiro.

The investment was confirmed by Peter Scherer, global sales and marketing director for pharmaceutical tubing during a visit to the Rio site attended by Pharmabiz and other specialist press invited to take part in a press conference during the second week of April.

The meeting included the company’s main clients in Brazil, Colombia and Argentina and brought in several spokespeople from the company who offered a technical conference on mutual benefits gained from improvements in operations.

Although the region represents just 5% of global sales -compared with 46% in Europe; 25% in Asia-Pacific; and 23% in North America- the company maintains a solid presence on the continent. As well as its site in Rio, where it makes raw material, it has another plant in Brazil, in Sao Paulo, where it produces capsules, and a plant in Munro -in Argentina- where it manufactures glass ampoules and vials.

In the pharmaceutical glass sector, Schott reigns in the region. Its international competitors include Japan’s Nipro Pharmapackaging and Nippon Electric Glass –NEG-; and the US’s Corning. A local rival is Rigolleau through its Amposan division.

The Rio plant, which manufactures white and amber glass tubes for pharmaceutical use has a capacity of around 25,000 tons a year. Of that, 35% is consumed in Brazil and the rest is exported to other markets in the region.

Schott’s investment in Argentina remains solid despite a 47%  drop in the local market during 2018 due to a drop in sales as a result of the recession.

Topics on the future of the business and competition posed by plastic packaging were put on the table during a program with diverse speakers, which also included an expert from Brazil’s regulator ANVISA. Present from Schott were Joerg Wagner, technical director at Schott Brazil’s Vitrofarma division; Cristian Schmidt, general manager for Argentina; and Quineo Marques, commercial director for Schott Brazil.