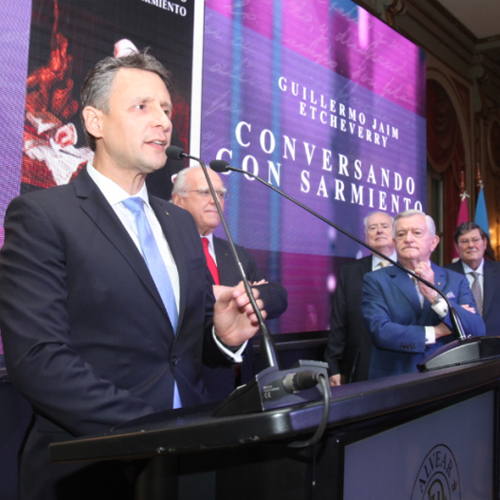 In the event at Hotel Alvear, the group’s Juan Carlos Bagó said it would be the last time he presented on stage. He said he was taking a difficult but mature decision to step back from the limelight but would continue firm in the group.

The major Argentine drugmaker Bagó held its traditional end of year event yesterday, November 28, at Buenos Aires’ Hotel Alvear. and took a look back at the outgoing year.

One of the two brothers who lead the company bid something of a farewell at the event that every year brings together the group’s main directors, sector bodies and competitors. Juan Carlos Bagó said it would be his last year behind the microphone. He said he was taking a difficult but mature decision to step back from the limelight but would continue firm in the group.

Sebastián Bagó made his traditional roundup of the global situation. He said that the world had been creeping forward in growth for a long time now at a tune of 2% to 3% a year, but also highlighted technology as a key area that would move forward exponentially. As an example, he mentioned the local arrival and consolidation of  digital wallets illustrating how smartphones have become a kind of personal operations centre.

General manager Edgardo Vázquez received strong support from the Bagó brothers. Sebastián said he was satisfied with Vázquez’s management and the changes achieved in the last year.

He said that while one year ago he had described 2018 as  «a disappointing year» in Argentina, 2019 was not far behind, plagues as it was by high inflation and high interest rates. See article on 2018 in Spanish

On the plus side, he said that the country has consolidated its democracy in peace and he underlined three fundamental principles for this recent period in the country’s history freedom, trust and enthusiasm , and mentioned Argentina’s new president elect Alberto Fernández, saying, «We’re willing to support everything that is neccesary to help».

He made special mention of general manager Edgardo Vázquez who took up his position a year ago – the first time someone had been appointed fomr outside the family, signalling a step back for the Bagó brothers. He said that the group is  que growing and has  unas líneas especiales a la re-organización encarada. He said that the group was very satisfied with Vázquez’s stewardship, describing him as  «muy profesional, calm and a good team player».