The gradual loss of staff at the Argentina subsidiary of Switzerland’s Roche has become impossible to hide. Although its communication department continues to try to show the company as a multinational with excellent benefits, the perks are clearly not proving to be enough to retain mid-level executives.

Swiss drugmaker Roche is one of the many multinationals that cannot resist falling into the trap of boasting of being one of the best employers. Yet reality seems to be showing a different scenario in Argentina.

According to a survey carried out by Pharmabiz, at least a dozen executives have walked in the last six months, mainly middle management in the oncology and complex therapies businesses. See table

The resignations are producing a haemorrhage of managers and highlighting a marked gap between the youngest generations who appreciate massage sessions and cookery classes for interns and the middle managers who fail to find sufficiently challenging positions in the company. 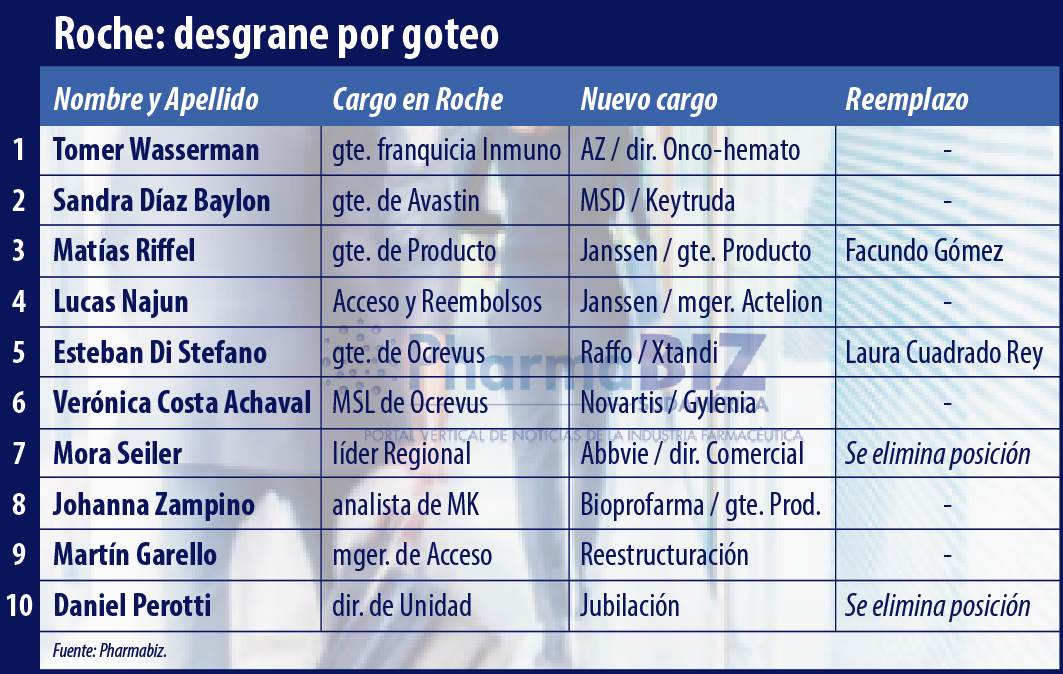 As an example, one manager who’s jumping is Tomer Wasserman, who from December 10 will join the UK’s AstraZeneca as director of onco-hematology, replacing Carlos Doti, who’s moved to another position in the company.

According to a survey carried out by Pharmabiz, at least a dozen executives have walked in the last six months. The exodus is mainly in middle management in the oncology and complex therapies businesses

. The company clearly is clearly suffering a human resources crisis under the watch of its CEO of 15 years the Uruguayan Osvaldo De La Fuente.

Two exits emerged this past week: Johanna Zampino, who’s going to the Argentine Bagó group’s drugmaker Bioprofarma as brand manager for onco-hematology, replacing Ignacio Borrego, and Martín Garello who ends his tenure as access manager after 15 years at the company owing to a restructuring of the area.

Other recent exits include Sandra Díaz Baylon, who was in charge of Avastin, for lung cancer, and has moved to the US company MSD to head up one of the indications of Keytruda, the company’s star product.

The gap left by former Ocrevus product manager Esteban Di Stefano when he was recruited by Argentina’s Raffo as manager for its product Xtandi is one of the few cases where Roche had brought in a replacement – in this case Laura Cuadrado Rey from Bayer.

The multinational boasted this month via head of communications Cecilia Rossi of a survey carried out for Apertura magazine in which it was ranked 6th best employer in the country. It also makes much of the prizes it’s won, including the Mercer wellbeing programme and Eikon awards.

Another exec who made the leap to a more challenging post was Mora Seiler who’s spent almost a quarter now at Abbvie as commercial director. Then there’s Verónica Costa Achaval, MSL for Ocrevus who moved to another Swiss company, Novartis as manager for Gylenia.

Two other executives moved to the local subsidiary of Janssen: former Hematology manager Matías Riffel and Lucas Najun from the access area.

To top things off, unit director Daniel Perotti retires at the end of the year and Roche has announced that he will not be replaced, his functions instead being absorbed by his peer Daniel Roqué.